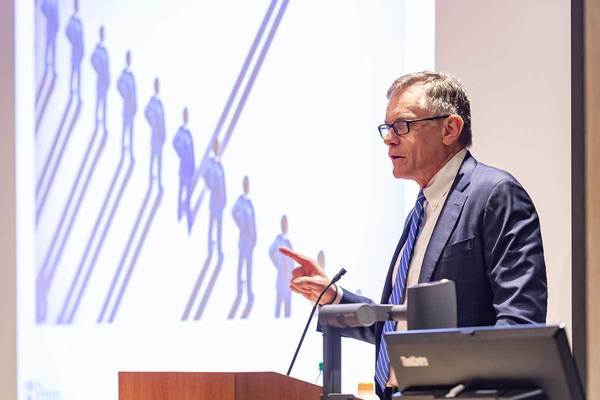 Medicine and patient care for those who have rare diseases is undergoing a revolution, according to John Crowley, chairman and chief executive officer of Amicus Therapeutics and founding board member of Global Genes.

And the first question he posed to researchers, drug companies, and patient advocate groups who gathered in a working session at the University of Notre Dame in October was simple: “What role can Notre Dame and universities play in this revolution?”

A rare disease, by National Institutes of Health standards, is one that affects fewer than 200,000 people in the United States at any given time. Such diseases run the gamut from certain cancers to lysosomal storage disorders including Niemann Pick Disease Type C, which took the lives of three grandchildren of the late Notre Dame Football Coach Ara Parseghian. Patients with rare diseases often experience long roads before diagnosis, and are faced with limited therapeutic options.

The collaborative session, “Accelerating Academic Rare Disease Research and Innovation,” was sponsored by Amicus Therapeutics and drew stakeholders from across the country who discussed strategies for advancing research, bringing new drugs to market, advocating for patients, and disseminating information about rare diseases, among other topics. It was co-chaired by Crowley and Dr. Marshall Summar, division chief and genetics metabolism director of the Rare Disease Institute at Children’s National Health System in Washington D.C., as well as chairman of National Organization for Rare Disorders.

Keynote speaker Dr. James Wilson, director of the Orphan Disease Center and the Gene Therapy Program at the University of Pennsylvania, described how the development of gene therapies disrupted and displaced traditional methods of delivering treatments to patients.  “These therapies were hatched and fermented in academic centers outside of traditional business centers,” he said.

Instead of treating diseases with drugs or surgery, gene therapy delivers a gene into a cell with the goal of reprogramming it and treating the disease. When academic researchers were able to overcome the challenge of transferring genes to metabolic cells for degenerative neurological diseases around 2001, the gene therapy industry bloomed. “They are ‘one and done therapies. No pills are necessary,” Wilson explained, adding that gene therapies to treat hemophilia and muscular dystrophy have had some good results.

“The complicated part is disrupting traditional markets and getting it to patients,” he said. But this is where he believes Notre Dame can emerge as a leader, helping bring new technologies to patients by leveraging its strong relationships with politicians and legal institutions.

A stakeholder panel moderated by Crowley and Summar discussed the challenges of getting treatments for rare diseases approved by the Federal Drug Administration (FDA). Traditional FDA protocols for clinical trials are not practical for rare diseases, and make it hard to get treatments approved. The small number of patients, the progressive nature of the diseases, and the wide variations in disease were reasons noted by the panelists that make it hard to conduct clinical trials for new treatments.

“There is not the same evidence base for rare diseases as there is for cancer or other more widespread diseases,” said panelist Diana Wetmore, vice president of therapeutic development for the Harrington Discovery Institute, at University Hospitals Cleveland Medical Center. “More research is needed.” 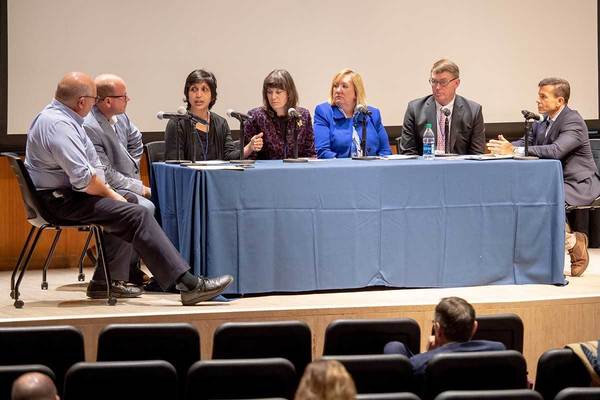 Those on the panel agreed that research universities like Notre Dame can invest in models that support short-term, moderate, and long-term ideas and research, noting there can be more collaboration between researchers and pharmaceutical companies.  “Notre Dame has an opportunity to improve the delivery system and work with the legal systems and the FDA to create more flexible systems for clinical trials and to bring treatments for rare diseases forward,” said Kasturi Haldar, the Rev. Julius A. Nieuwland Professor, C.S.C., Professor of Biological Sciences and the Parsons-Quinn Director of the Boler-Parseghian Center for Rare and Neglected Diseases.

Those on a second panel, moderated by Sean Kassen, director of the Ara Parseghian Medical Research Fund, and Jayne Gershkowitz, chief patient advocate at Amicus Therapeutics, focused their discussion on the role of patient advocacy in developing treatments for rare diseases.

“No one has the passion the family has,” said panelist Jean Campbell, principal of JF Campbell Consultants and co-founder of Professional Patient Advocates in Life Science (PPALS). “When we listen to the patients, we can do the best we can with academic researchers and clinics. Patient registries are important as we move into clinics.”

Patient advocacy has changed a lot in the past ten years, noted panelist Cindy Parseghian, president and co-founder of the Ara Parseghian Medical Research Fund. The internet has made it easier to connect, but “Go Fund Me”-style initiatives have created a proliferation of fundraisers and foundations, making it more difficult to have a cohesive voice, she told the audience.

Moving the Ara Parseghian Medical Foundation from Tucson to Notre Dame resulted in a strong partnership, explained Parseghian. “Notre Dame embraced the mission and made it its own,” she said. “Researchers in academic labs and the National Institutes of Health are able to develop new compounds that could be the next drug for treating diseases.”

Overall, the working session highlighted the need for more collaboration in order to find cures for rare diseases. Partnerships among all stakeholders—foundations, academic researchers, industry, and government—-are critical to bringing ideas to the forefront.