When senior science-business major Katie Beriont signed on to play Division I softball for the University of Notre Dame, she never thought her effort on the field would make an impact on the lives of cancer patients and their families. Now in her final season, Beriont has taken a role in organizing the team’s 8th annual Strikeout Cancer event. 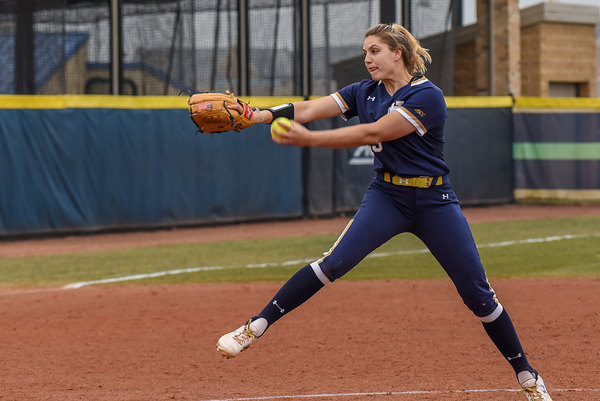 Taking place this coming Friday, April 13 through Sunday, April 15, Strikeout Cancer is an annual event put on by the women’s softball team to raise awareness and funds for cancer patients and their families. Strikeout Cancer started as a way to support Irish Head Coach Deanna Gumpf and her daughter Tatum, who was diagnosed with acute lymphoblastic leukemia in the summer of 2010 and is now in remission. Beriont and her teammates are hoping to top last year’s record $45,000 raised, all of which is to be donated to the South Bend Memorial Hospital to support families with children afflicted by cancer.

For Beriont, a Colts Neck, New Jersey native, Strikeout Cancer has been an important part of her Notre Dame softball career.  “It really makes playing softball here something more than just being a Notre Dame athlete, to be able make an impact outside of your sport,” Beriont said. The weekend is especially important for many members of the team who have close family members affected by cancer.

Strikeout Cancer has also inspired her to pursue cancer research. For the past year, Beriont has researched pancreatic cancer in the Harper Cancer Research Institute with Reginald Hill, the Archibald Assistant Professor of Cancer Biology. “It was the first way I felt like I could make an impact in the fight against cancer after participating in Strikeout Cancer,” Beriont said.

After graduating, Beriont will enroll in the ESTEEM graduate program, a program designed to integrate science and engineering with entrepreneurship. “What led me to ESTEEM was working at Harper, where I got to be exposed to seeing the results of a lot of experiments and the power of research,” Beriont said. She ultimately hopes that she can play a role in science communication and building links between various labs to collaborate on research.

The biggest part of the Strikeout Cancer weekend is Friday’s trivia night and silent auction. All of this is made possible by players garnering sponsorships to support the event, contacting faculty around campus, extended family, alumni, and everyone in between. Beriont has played a significant part in acquiring sponsorships from various athletic teams around campus.

On the weekend, the Irish will take on the Duke University Blue Devils in a three-game series. What makes it especially memorable for the team is that many children being treated for cancer in the South Bend Memorial Hospital stop by and take part in the team’s activities. “It’s really fun to be able to interact with the kids who we are helping. They’re always in such good spirits, and it’s just a such a source of hope for everyone,” Beriont said. In between games, players will take part in the tradition to donate their hair to the Bald and the Beautiful, an annual event at Notre Dame where students can donate their hair to support the fight against pediatric cancer.

This year is an especially important year for Strikeout Cancer and the softball program in general because it is the program’s 30th anniversary, and the team is expecting alumni from all 30 years to be present this weekend.

For Beriont, Strikeout Cancer has also inspired her to pursue cancer research. For the past year, Beriont has researched pancreatic cancer in the Harper Cancer Research Institute with Reginald Hill, the Archibald Assistant Professor of Cancer Biology. “It was the first way I felt like I could make an impact in the fight against cancer after participating in Strikeout Cancer,” Beriont said.

Ultimately, Beriont is grateful for the softball program and Strikeout Cancer for leading her to where she is today. “I am really thankful that our coaches see the program as something more than just softball, that they see it as a platform to do good and instill greater values that extend beyond being an athlete and inspires us to make a difference,” Beriont said.