Kaitlin Cole, like many other sophomores in the College of Science, intends to go to medical school after graduation. She also has dreams of becoming an orthopedic surgeon.

Unlike many other aspiring doctors, however, Cole has a rigorous athletics schedule — as a member of the Notre Dame women’s top-five NCAA basketball team. 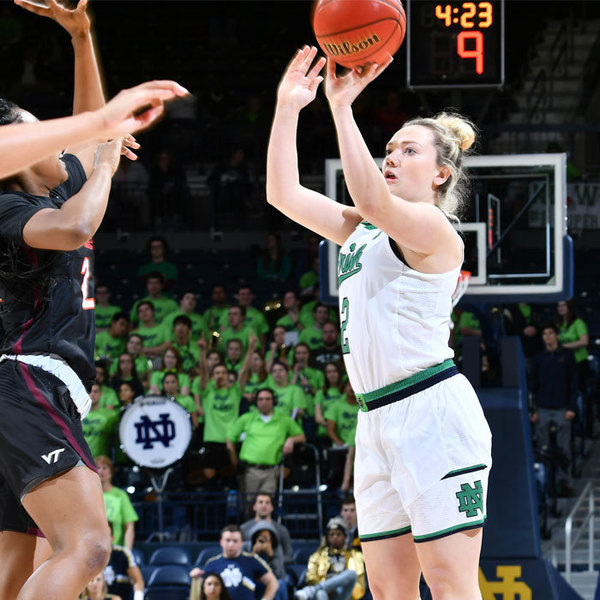 Cole never expected to be play collegiate basketball at Notre Dame. She assumed that her basketball career was over after high school when she chose to come to Notre Dame over playing competitively at other universities. “I got some offers from D2 and D3 schools, but I got into Notre Dame, and my dad went here, so I’ve always wanted to go to Notre Dame,” Cole said. “I could not pass up the idea of coming here.”

However, when she arrived at Notre Dame, basketball did not seem to leave her. After participating in intramural basketball and the annual Bookstore Basketball tournament, Cole realized how much she missed the sport and wanted to play. She emailed the team’s director the following summer, and was invited to try out for the team. She earned a spot as a walk-on for the 2017-18 season.

Despite now being a member of one of the nation’s top women’s basketball programs, Cole has no plans to abandon her dreams of becoming an orthopedic surgeon. She has aspired to that goal since she tore  the anterior cruciate ligament (ACL) in her knee while playing basketball as a high school freshman. “My orthopedic surgeon was amazing. I was really scared about the surgery as a 13-year-old, but he did a really great job in connecting with me,” Cole said. Cole added that she was particularly fascinated when her orthopedic surgeon showed her a diagram of her body shooting a basketball and how that related to her injury.

Since then, Cole’s passion for medicine has blossomed, despite the academic rigor of her study. “I was not good at organic chemistry, but I loved it. I really like learning biology,” Cole said. Seeing three of her teammates recover from torn ACLs this season after working with an orthopedic surgeon has especially inspired her. “What really keeps me going is knowing that I will be a doctor one day,” she said.

Balancing basketball and academics has been a challenge, but she’s developed a rhythm. Her day starts at 7 a.m., with classes in the morning and practice in the afternoon. Her evenings are filled with tutoring, homework, and labs. Cole said, “It’s hard, but I love it, so it’s fine for me.” She jokingly added, “I’m tired right now.”

Ultimately, Cole views her medical school aspirations as worth all the hard work she has been putting into basketball and academics, because being an athlete has complemented her studies. “Those passions drive me to work hard—to work on the court and work in the classroom. I feel like if I can push myself on the court, then I can push myself off the court,” Cole said.

Looking ahead, Cole intends to enroll in medical school following her graduation from Notre Dame. Her ultimate dream would be to work for a university basketball team as a team doctor. However, for the time being, Cole will focus on both of her passions for medicine and basketball.

“Attending Notre Dame was more important than basketball,” she said, pausing before quickly adding, “But it turned out that it wasn’t.”